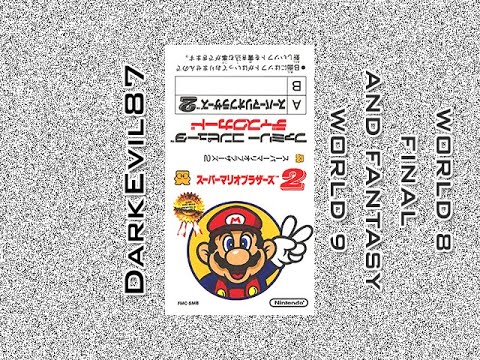 First thing I want to tell you is that those grey walls in World 9-4 are not random shapes (if you don’t understand them), they’re katakana characters, the simplest form of Japanese writing which is divided in three parts: hiragana, katakana and kanji. The characters seen here are アリガトウ! (you might not see what I’ve just written if you don’t have the proper fonts intalled). The pronunciation and romanisation of these characters individually is a-ri-ga-to-u-! or simply arigatō!, meaning thank you! Now that this is out of the way, let’s talk about the rest. The princess is well-versed in poetry or so it seems. The ending music got an upgrade and I’d say overall it’s more complete than in the first game, but like always don’t expect any long story-driven ending to these old games (and even recent games sometimes). After that, because I didn’t use any warp zones during the entire course of the game, I get to World 9 which is the Fantasy World. This is a very weird World, breaking much of the game’s rules, but it’s also the easiest World. You have only one life and after World 9-4, you get back to World 9-1 until you lose that life. Then it’s Game Over, but it’s not really over yet… Don’t forget, if you have requests like for another video game walkthrough or something, just ask here or on my channel or even by sending me a message and if I can make it, there are good chances that I will.